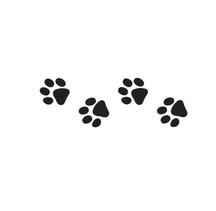 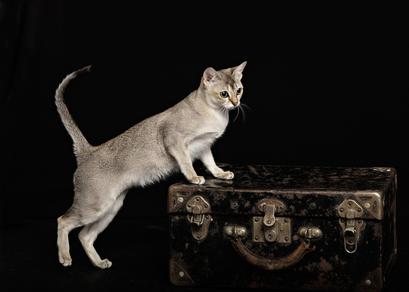 Standard of the breed

The origin of Singapura​

Evolution of the kitten

​The Singapura is a very curious little cat, extrovert and very intelligent. His morbid curiosity leads him to browse in every corner of the house. Unfortunately, this excessive curiosity results in him being locked up often in unusual places. This active little cat loves to play, even in adulthood. For him, everything can become a new adventure. He likes to get high, but most of all will want to curl up on your shoulder.

​This cat is asking for attention. He likes to be the center of attention. He will like to follow you in your activities and he will be happy to be involved in it. He has the habit of always getting in the middle of everything you do.

​Singapura is very affectionate. He is very sensitive to the moods of his master, whom he follows everywhere and to whom he devotes an incredible confidence. This cat constantly shows the need to have physical contact with his master. He will gladly be by your side every night to snuggle under your comforter and he will lie down on your lap or on your stomach.

​This little cat is not very talkative, he has a delicate voice that he uses with a nasty pleasure to complain, but especially to attract your attention and make his point. The Singapura is a very expressive cat, just dive into his beautiful eyes to understand what he wants.

​Singapura is not a brawling cat. He loves the company of other animals and children. Very social, it will be a point of honor to welcome your visitors.

​Since he has no undercoat, he does not like the cold and appreciates the warmth above all else. So his favorite places are sunny places, computer tops, radiators, etc.

​Singapura is a balanced cat who likes to be surrounded by people and needs to feel loved. He can not flourish if he spends his days alone. Life in the apartment suits him very well. He will find a distracting environment where he will explore every nook and cranny. He will sleep on the windowsill and if he gets a lot of affection he will make him a happy and happy cat.​​ 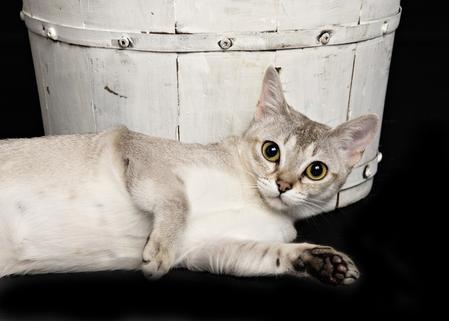 Today Singapora cats of Singapore respond to the sweet name of "Kucinta", translate "cats of love". The Singaporean Tourist Board is making Singapura its national mascot following the acceptance of Singapura as a natural breed. It was almost impossible for several years to import original cats from Singapore, which makes it more difficult to breed this magnificent breed.

​During their first appearances in the United States, the Singapuras were a great success. In 1984, the TICA (the international cats association) recognized Singapura as a full-fledged breed. It was the first federation to accept Singapura in the league, followed closely by the other federations feline. Today, the popularity of Singapura is growing, although the breed is little known, there are now Singapura breeders all over the world.

​The Singapura is known to be the smallest cat breed in the world,

not however be judged by its small size, because it is unique in

many ways. What captivates you first with the Singapura are its eyes. A

see well in the sewers of Singapore. Its fur is unique, it is tagged,

just like the hare, the boar, the hedgehog, etc ... It would allow

them to camouflage without difficulty if they lived in the wild.​​

Standard of the breed
Evolution of the kitten